Bakewell may, perhaps, be best known for its famous pudding, and no doubt that is what attracts many tourists – but the town has much more to offer than this tasty culinary treat. 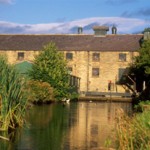 There is, for example, Bakewell Church, steeped in history going back to Saxon times, and, close by, The Old House Museum housed in the oldest remaining building in Bakewell (dating from 1534), where you will find a small exhibition of local life and artefacts.

Also of great interest is Caudwell’s Mill at Rowsley, the last in the area to mill flour.

Lead mines used to abound in the Peak District and one of the most famous was The Magpie Mine, just south of Sheldon, which is the only one with a significant part of its building still standing, having been taken into the care of the Peak District Mines Historical Society in 1962. The mine buildings can be seen from the Bakewell – Chelmorton road. 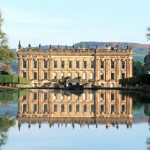 As for historic houses surely there are few – if any – better examples than Chatsworth House and Haddon Hall. Looking west from the former over the rolling Derbyshire countryside, the Duke of Devonshire once remarked: “When the sun is shining I don’t think there is anywhere better in the whole world.”

You have to agree with him. And the house itself is glorious to behold. When you see it in its riverside setting for the first time it is quite breathtaking. Little wonder that it is a prime tourist attraction. Meanwhile, Haddon Hall, alongside the River Wye, just south of Bakewell, and one of the seats of the Dukes of Rutland, is the finest example of a medieval manor house still in existence.

As for beauty spots, they are too numerous to mention, but one of the favourites with tourists is Monsal Head from where you are blessed with a magnificent view down Monsal Dale and up the Wye valley. In the same vicinity is The Monsal Trail, which follows the path of the former Midland Railway from Blackwell Mill cottages to Coombs Viaduct, just past the former Bakewell station. For most of the way it follows the path of the River Wye, thus offering yet more spectacular scenery.

Stanton Moor is in an advantageous position overlooking both the Derwent and Wye valleys, and this may be why it was chosen as a centre by the Bronze Age inhabitants of the area, who have left so many traces of their occupation on the moor. Then there are the special events which draw thousands of people to Bakewell in the summer months, starting with the Derbyshire tradition of well dressing during the last week in June, which leads immediately into the town’s annual carnival in the first week in July.

The renowned Bakewell Show – reputed to be the largest tented event of its kind in the United Kingdom – attracts around 60,000 people over two hectic days in early August, and a week later comes the Arts Festival, which is the most recent addition to the crowded calendar. Add to all this various riverside attractions and it is easy to see why Bakewell is a magnet for tourists of all kinds.

If you are looking for a short break in another beautiful part of Northern England, which also hosted the Tour de France, why not take a look at the Yorkshire Dales

Recommended Self Catering Cottages in Bakewell